As the Centennial year of Self-Realization Fellowship gets underway, news of the 100th anniversary of Paramahansa Yogananda’s arrival in the United States and the founding of his worldwide society is making its way into major media outlets throughout the world. We would like to share with you some of the coverage thus far. 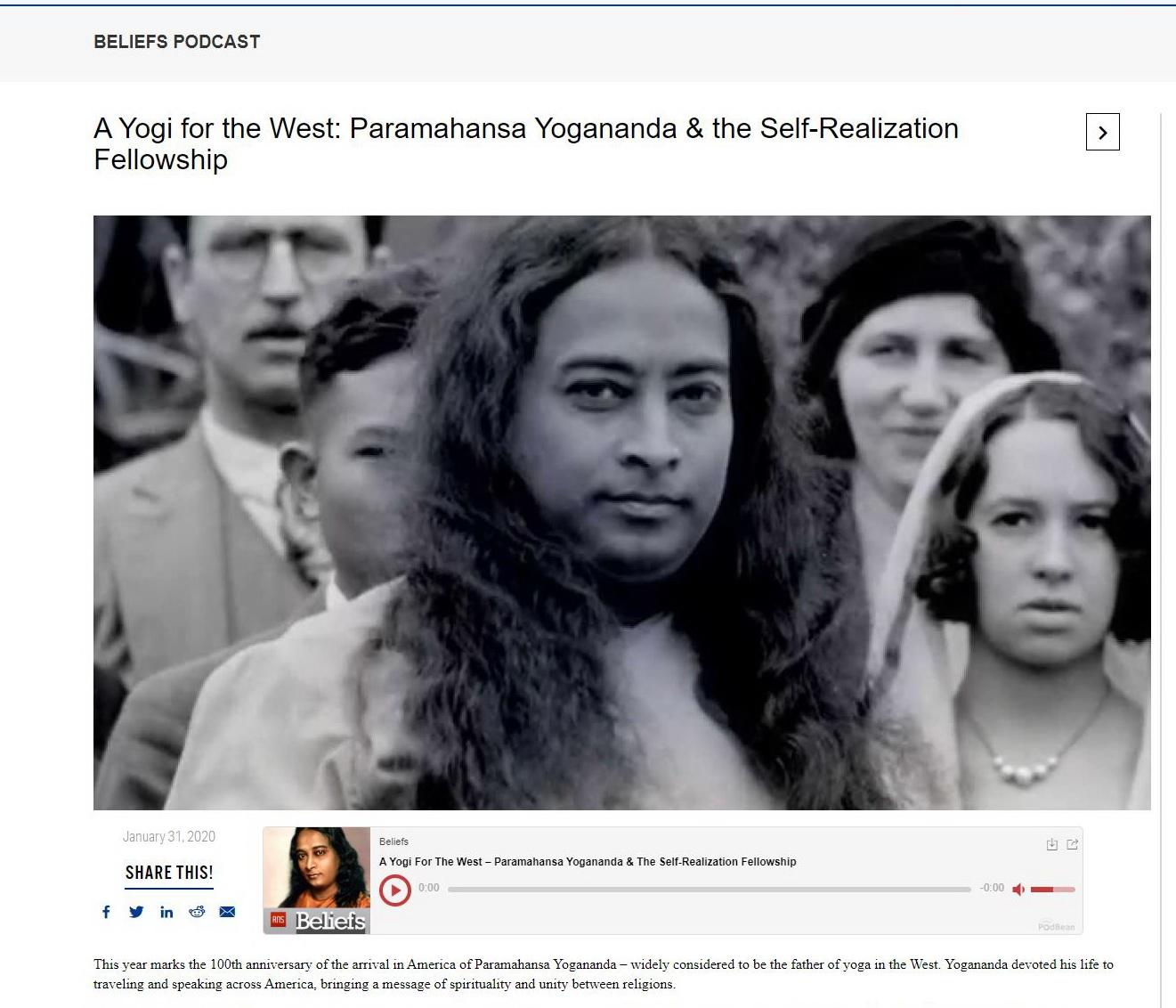 Recently Jonathan Woodward, producer of the Beliefs podcast from Religion News Service (RNS), interviewed four SRF monastics at the SRF International Headquarters in Los Angeles on the topics of the 100th anniversary of Paramahansa Yogananda’s arrival in the United States and the profound impact that he had on seekers in the West and throughout the world. To listen to the podcast of the interview with Sister Draupadi, Brother Bhumananda, Brother Prafullananda, and Brahmachari Andy, visit: ReligionNews.com

Religion News Service is an independent, nonprofit, and award-winning news agency that covers religion, spirituality, culture and ethics both within the U.S. and internationally. RNS wire reports are featured widely by other media outlets, including The Washington Post and National Public Radio. 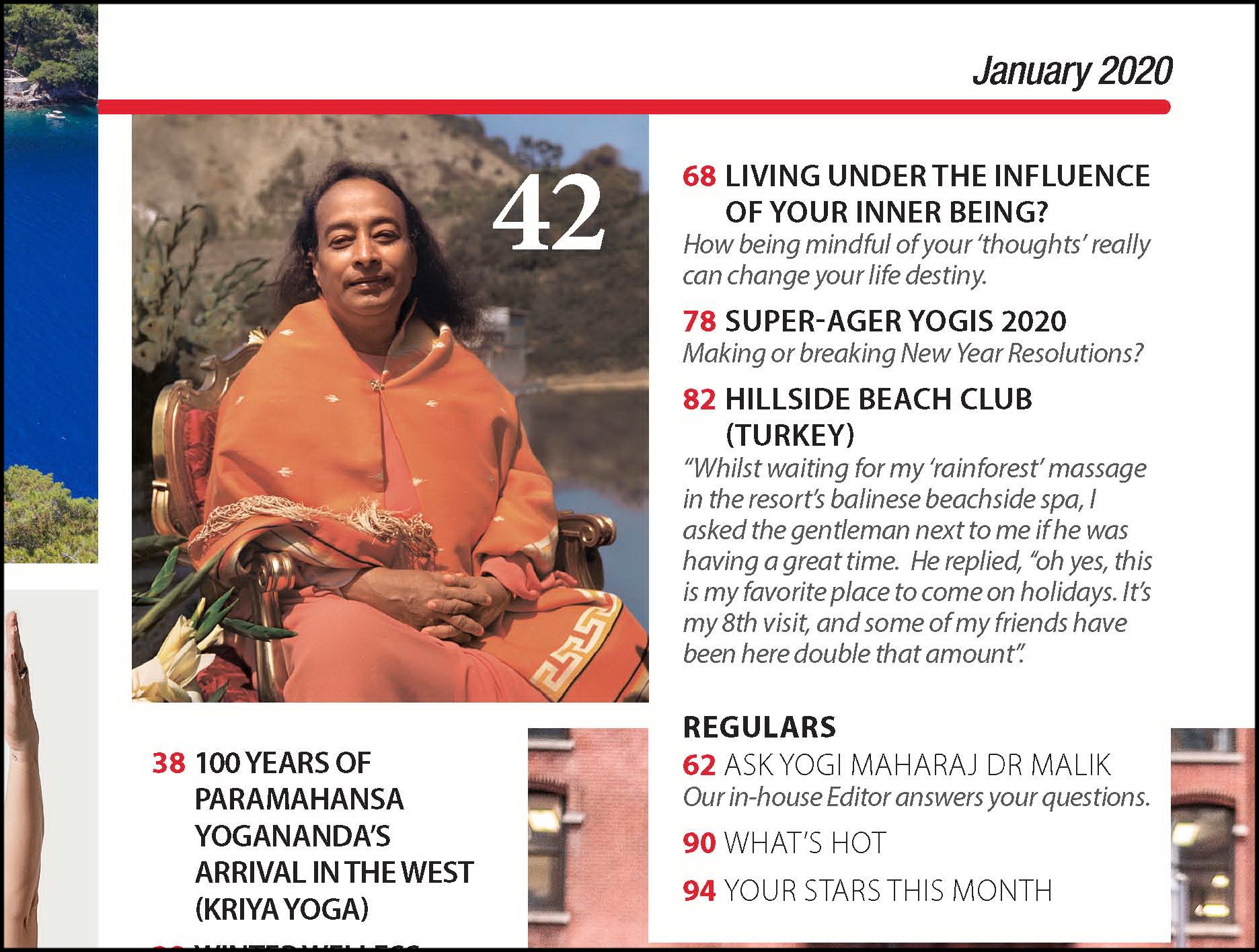 Yoga Magazine, one of the U.K.’s leading yoga journals (distributed in the U.K. and the U.S.), dedicated a nine-page spread to the 100th anniversary of Paramahansa Yogananda’s arrival in the West and the history of his enduring effort to spread his Kriya Yoga teachings worldwide. The article points out, “In the 100 years since [Paramahansa Yogananda’s] arrival in America, the perception of yoga has evolved significantly—from being viewed as an ‘exotic’ series of physical exercises to understanding yoga as an entire way of life that incorporates scientific methods of meditation leading to realization of one’s highest potential and an enduring experience of profound inner peace and joy.”

To learn how to access the magazine, visit yogamagazine.com. 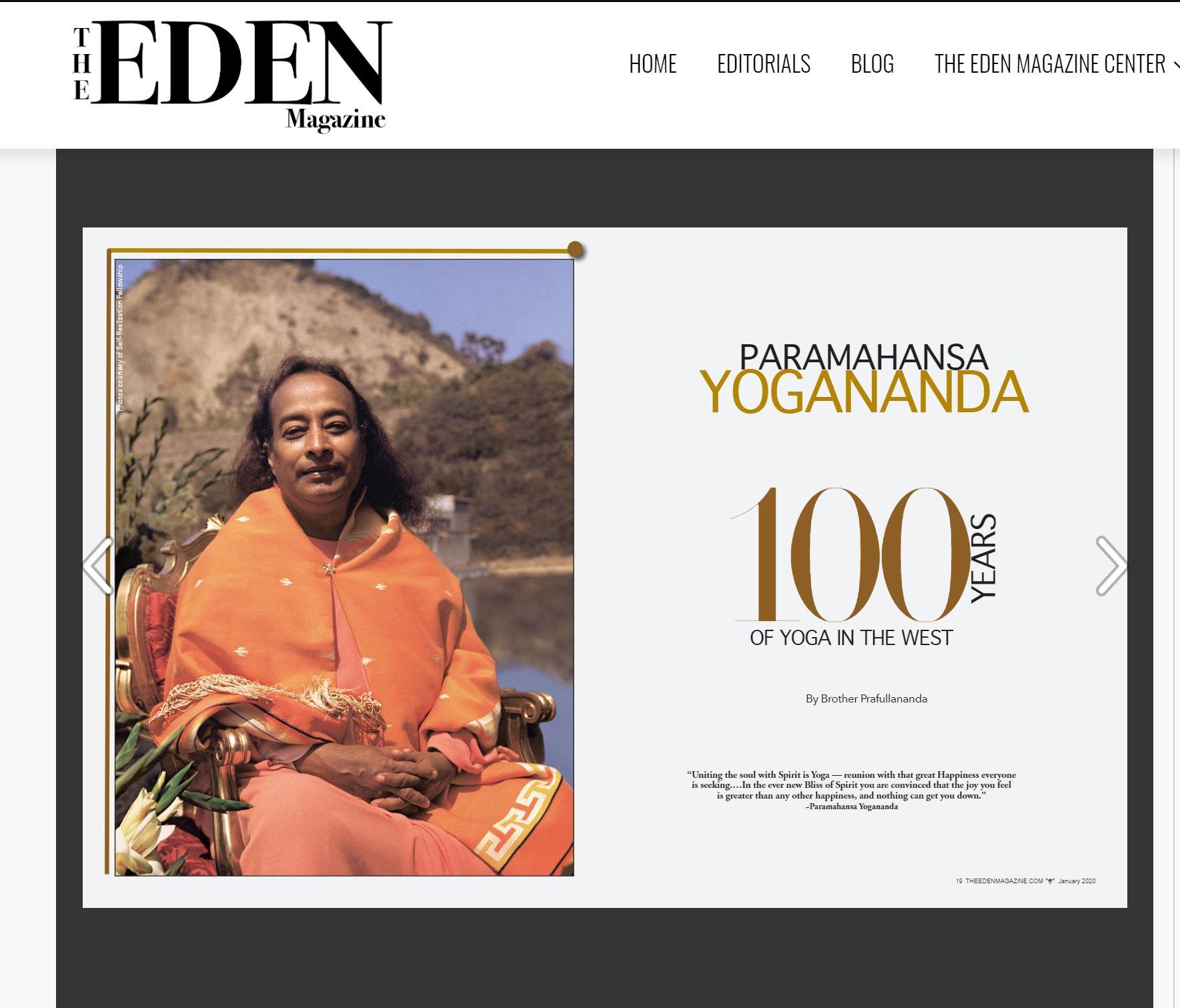 The Eden Magazine devoted six pages to SRF’s centennial anniversary, including an article by SRF Minister Brother Prafullananda, who wrote, “As the Indian delegate to an International Congress of Religious Liberals soon to convene in Boston, Paramahansa Yogananda’s arrival marked the beginning of a profound change in the spiritual landscape of America—a change that decades later would result in the recognition of Yogananda as the ‘father of Yoga in the West.’”

Read more: The Eden Magazine January 2020 (Scroll down to the bottom of the homepage and use the embedded reader to go to page 18 of the online edition.) 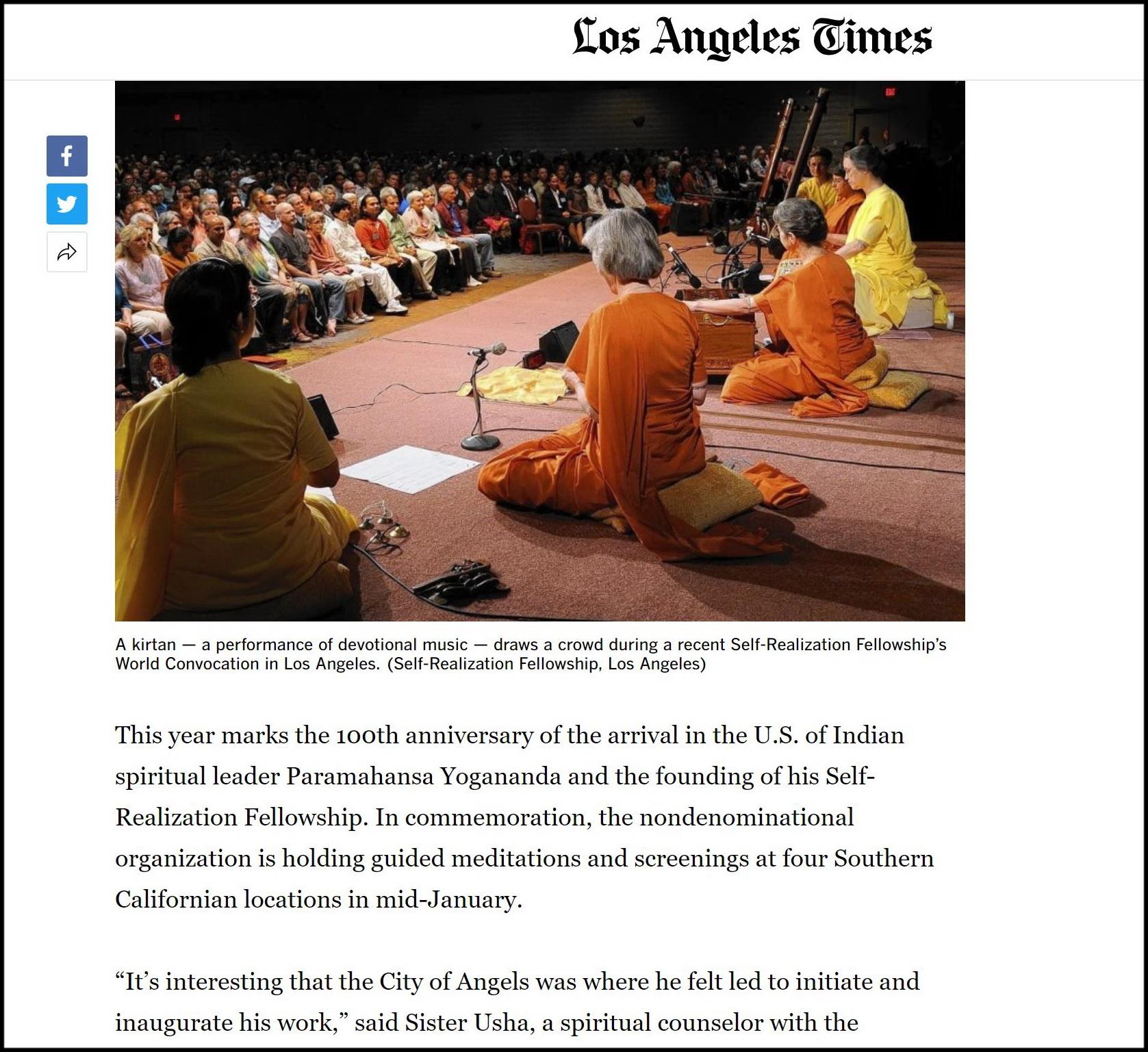 The Los Angeles Times featured a brief article in its lifestyle section on the SRF Centennial Open House events in January at SRF temples in the greater Los Angeles area in Hollywood, Glendale, Pacific Palisades (the Lake Shrine), and Fullerton. 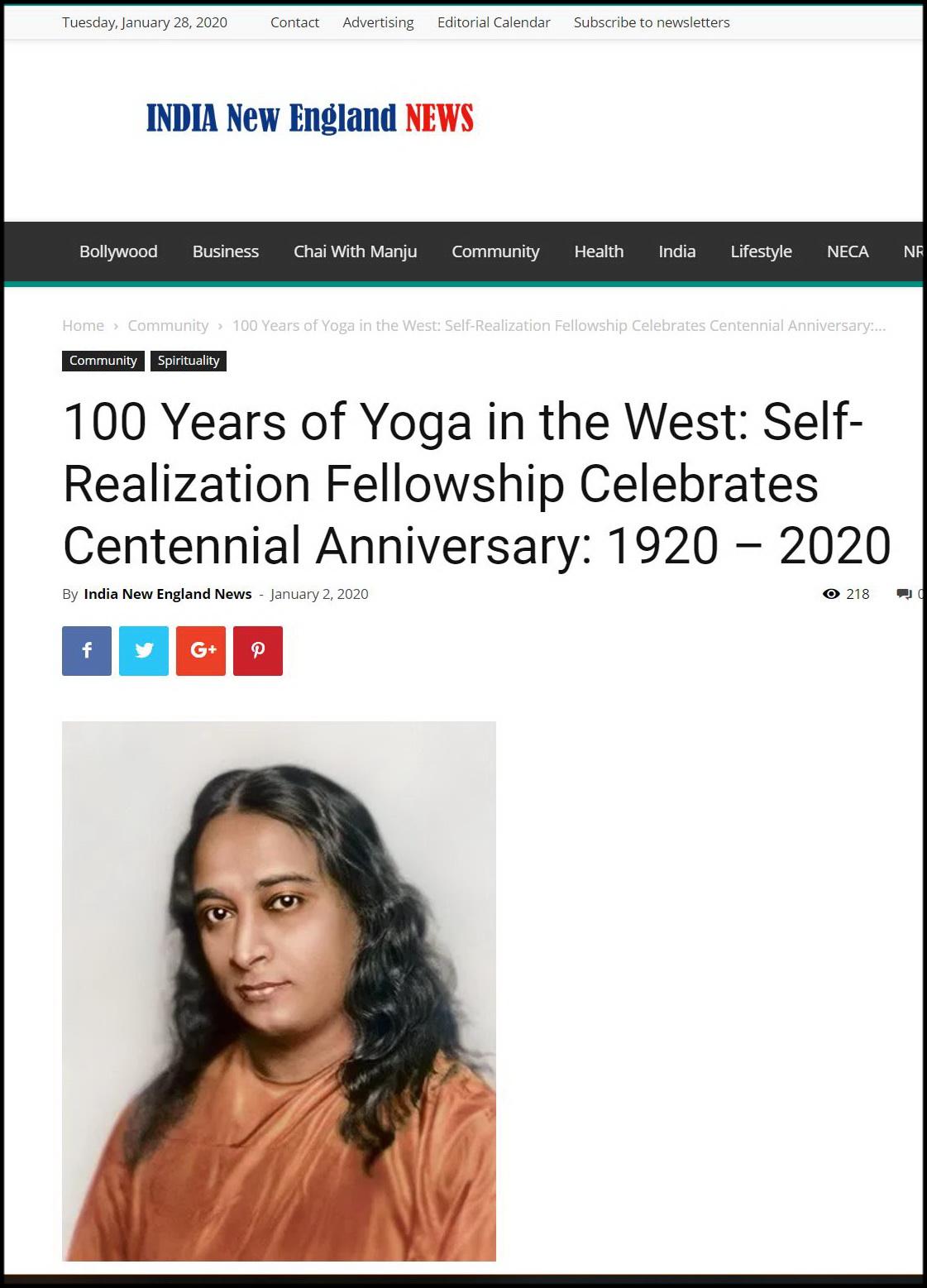 India New England News, the premier news journal serving the Indo-American community throughout New England, quotes Brother Chidananda in its article about the SRF Centennial: “What Paramahansa Yogananda brought to the West is perhaps one of the greatest gifts to humankind – India’s ancient science of Yoga, the science of knowing the Self, of realizing and experiencing who we truly are, divine souls with unlimited potential.”

Read more: IndiaNewEngland.com 100 Years of Yoga in the West: Self Realization Fellowship-celebrates-centennial-anniversary 1920-2020