In keeping with Paramahansa Yogananda’s spiritual ideal “to serve mankind as one’s larger Self,” Self-Realization Fellowship (SRF) temples and centers are reaching out to thousands in need during this holiday season with charitable drives and ministry. 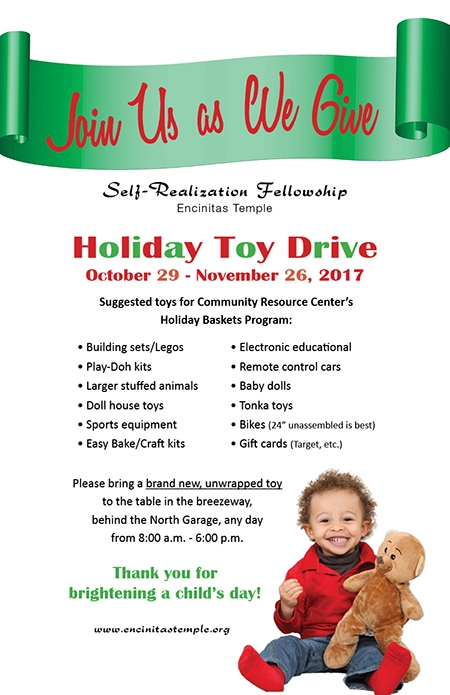 The SRF Lake Shrine Temple in Pacific Palisades hosted this year’s 2017 Pacific Palisades Interfaith Service, a diverse gathering of clergy and their congregants who unite each year around the Thanksgiving holiday to pray together and foster cultural and spiritual understanding. The service, which took place on Monday, November 20, was conducted by a representation of clergy, and included for the first time a guided meditation led by Brother Satyananda, as well as an interfaith choir and prayers from all participating faiths. Offertory proceeds were sent to Grief Haven, a nonprofit in Pacific Palisades dedicated to assisting parents who have lost a child. The joyous and uplifting service was followed by an informal reception.

Thanksgiving food drives were conducted by congregations of several SRF temples in 2017:

SRF members of the Encinitas Temple with toys destined as gifts for children of families in need.

As Christmas approaches, SRF temples are sponsoring toy drives and developing care packages for those in need.

Many SRF centers and meditation groups have also launched charitable projects to support the homeless population in their areas. For example:

Volunteers at the Good Samaritans of Garland

These activities provide a glimpse of the many ongoing charitable outreach programs organized by SRF temples, centers, meditation groups, and meditation circles around the world. During this holiday season, may we strive to bring joy and comfort to others by spreading “rays of hope and courage” in the hearts of all.

As Paramahansa Yogananda said: “Life should be chiefly service. Without that ideal, the intelligence that God has given you is not reaching out toward its goal. When in service you forget the little self, you will feel the big Self of Spirit. As the vital rays of the sun nurture all, so should you spread rays of hope in the hearts of the poor and forsaken, kindle courage in the hearts of the despondent, and light a new strength in the hearts of those who think that they are failures. When you realize that life is a joyous battle of duty and at the same time a passing dream, and when you become filled with the joy of making others happy by giving them kindness and peace, in God’s eyes your life is a success.”